The AGCO is an arm’s length regulatory agency of the provincial government, reporting to the Ministry of the Attorney General (MAG). It was established on February 23rd, 1998, under the Alcohol, Cannabis and Gaming Regulation and Public Protection Act, 1996. The AGCO continues as a corporation under a new corporate governance statute, the Alcohol and Gaming Commission of Ontario Act, 2019.

The AGCO is responsible for the administration of:

Over the last 10 years the AGCO’s mandate has continuously evolved to support the growth of the alcohol, lottery and gaming, horse racing, and retail cannabis sectors and, more recently, the open competitive igaming market.

In July 2021, changes to AGCO’s mandate and structure to regulate the new igaming framework and reflect the AGCO Board’s accountability to the Attorney General for oversight of iGaming Ontario came into effect. Ontario Regulation 517/21 under the Alcohol and Gaming Commission of Ontario Act, 2019, provides for appointments to the iGaming Ontario Board. There is the ability to cross-appoint AGCO Board members to the iGaming Ontario Board of Directors with certain limitations which are set out in regulation.

The AGCO remains an independent agency responsible for the regulation of gaming activities in the province, including igaming, to ensure it is conducted with honesty, integrity, and in the public interest. The Registrar’s role is independent of iGaming Ontario’s role in the conduct and management of igaming.

The AGCO is developing a comprehensive Conflict of Interest (COI) policy for all AGCO employees, the Registrar and CEO, and AGCO Board Members. iGaming Ontario is also required by regulation to develop and maintain a separate COI policy for its directors, officers employees.

The AGCO has also been working diligently to develop an igaming regulatory regime for an open, competitive market that provides consumer choice, protects consumers, supports legal market growth and provincial returns, and reduces red tape. The AGCO’s regulatory approach has remained nimble and adaptive to ensure these sectors are regulated effectively and efficiently while also ensuring that the sectors are conducted in accordance with the principles of honesty, integrity, and in the public interest, as prescribed in the AGCO’s governing legislation.

The AGCO’s Strategic Plan articulates the vision, goals, and key commitments the agency has made to fulfill its regulatory mandate and to support the achievement of the priorities outlined by the Ontario Government, in particular the Ministry of Attorney General to which the AGCO reports. 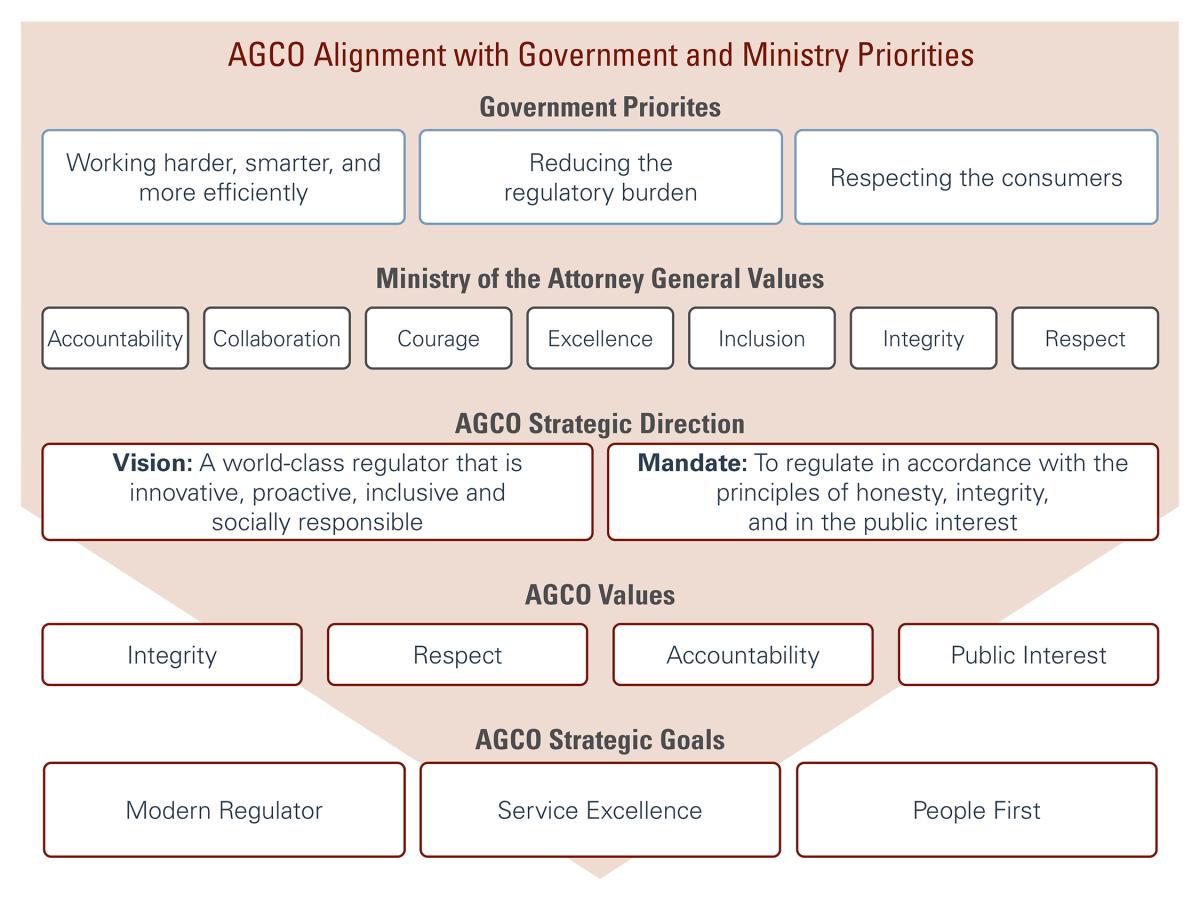 In fulfilling its mandate, the AGCO Chair reports to the Attorney General. The AGCO is committed to fulfilling the expectations as set out in its 2022-23 mandate letter from the Attorney General. The AGCO has developed this 2022-23 – 2024-25 Multi-Year Business Plan to align with the expectations in its mandate letter and in support of achieving the government’s objectives.